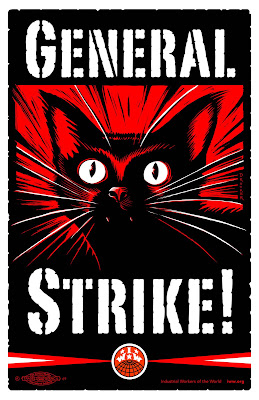 The Northeast Pennsylvania Industrial Workers of the World (IWW) stands in strong opposition to the reactionary and authoritarian forces that are on the rise in many parts of the world including the United States. These reactionaries will take control of the US government on January 20th with the inauguration of Donald Trump. These forces seek to divide the working class and turn worker against worker for the benefit of those that have the most wealth and power.  This is not new. We have seen this over and over again throughout history – from Franco’s Spain, Nazi Germany and the era of Thatcher and Reagan. Each of these regimes viciously attacked labor, immigrants and all others that opposed them.  We vow to fight this latest upsurge of reactionary forces together as a united working class seeking our liberation.  We refuse to see our fellow workers as enemies regardless of their race, ethnicity, gender, sexuality, religion, immigration status or nationality. We believe in the slogan: an injury to one is an injury to all.

On January 20th 2017 Donald Trump and his reactionary cabal will take office.  We must resist this dangerous regime. We have seen their values. They rose to power on a platform of hate and division. They will continue this as they take hold of the U.S. government. If history is any guide, we know that once they are fully in power, they will attack organized labor and every perceived enemy very soon after. They know that we, the workers that run society, are one of the few obstacles to their agenda. We need to take this opportunity to show our unity and our strength.

We call for mass action across the nation and the world on January 20th to resist these dangerous forces. We will organize resistance in our workplaces, our communities and in the streets. We call on all people to do the same. Take action to resist this rising tide of reactionary authoritarianism. Organize a walkout at your school or workplace. Call in sick. Take to the streets. Together, we will place our bodies upon the gears of the machine of hate and force it to a stop. As the Trump regime consolidates power and fills all the seats of the state with yes-men and cronies, the power of popular resistance is the only power we have left.  The IWW has been doing this for more than110 years and we will continue to fight for the liberation of the working class. This is a struggle for the type of world we want to live in - a struggle for humanity against barbarism.

If we do not act now, it will be too late.  If we let them take the reins of the state without any resistance they will think that they have won - that they have a mandate. They do not. We are the majority. We hold the greater power of collective resistance and collective solidarity.  We are humanity. We will win!

In Scranton we will be gathering at 12:00 noon for a rally and march in Courthouse Square. Join us in this show of solidarity.